An alternative name for this post could be “how I gained a few kilos”, but that aside it would be impossible to write a series on Poland without at least one post about the food. Not only because food is a topic worth discussing in any description of a place, but also its one of my vices, hence the aforementioned alternative title. So here is my best attempt at doing justice to the Polish cuisine.

Before I get onto the food, for anyone expecting recipes or similar, then this isn’t the place for you as I have no idea how half the stuff I’m going to describe is made, I’m just a grateful recipient.

Polish food is a large part of the culture as it is with many places, and it plays a big part in any celebration or party. Throughout the year I’ve come across some seasonal dishes from the more well known Christmas carp to Makowiec, a poppy seed filled yeast bread cake. One thing that’s common with Polish food is that it has a very home-cooked feel, even when eating out. It’s not the sort of cuisine that pretends to be something it isn’t, or leaves you wondering where the rest of it is. It’s just genuine, tasty food.

Something that became quickly apparent when I started visiting Poland is that vegetarian options are not as common as in the UK, quite often even some dishes that you would think might be vegetarian e.g. pierogi Ruskie (cheese and potato dumplings) are served with diced, fried boczek (bacon) on top. Now I’m not a vegetarian, so it wasn’t something that really affected me, but it is something to be aware of if you are vegetarian and travelling to Poland. It’s worth noting though, that in larger cities there is a much broader choice of food, as you would expect, so don’t let this limit your travels!

Regarding meat, Poland loves it’s smoked meats, whether that’s ham, sausages or bacon, and the variety of these meats its huge. Having had a British view of sausages before, where the variety is relatively limited, I was pretty surprised going into Polish delis at the scale, there is so much choice. There are all sorts of of sausages and hams ranging in different cuts of meat and levels of smokey flavour etc, and given the many different ways the Poles use sausages in different dishes, this makes a lot of sense. Outside of the deli meats, in my experience the most common meat dishes are pork and chicken based. Breaded cutlets, stuffed loin, roulades and ribs are all staples on most menus. There is certainly less beef on the menu than in the UK, but there are some dishes like goulash or steak that can be found made with beef. Duck is fairly common, with dishes like Kaczka po poznańsku, a roast duck leg served with red cabbage and dumplings or potatoes. 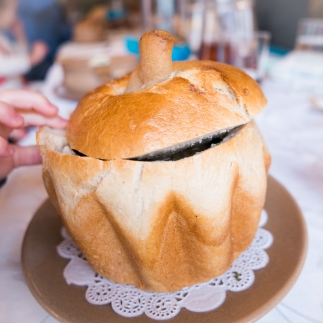 żurek, served in a bread bowl 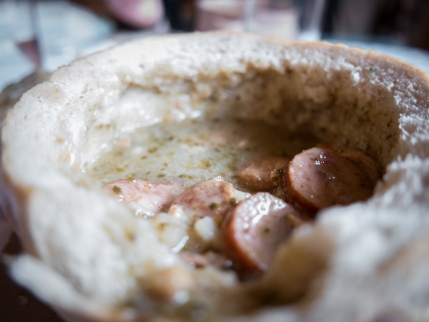 żurek, one of the more filling soups

Soups are very popular in Poland and can vary from a lighter soup like rosiół (chicken broth) or barszcz (beetroot soup), to the much more filling żurek, which is a sour rye soup with sausage and egg, often served in a bread bowl (one of my favourite dishes!). There’s nothing quite like żurek if you’ve been out in the cold all day, but soups are just as common on even the hottest summer days. Something else that’s really nice about Polish soups is that they frequently contain additional fillings like pasta or dumplings, as it really makes more of a meal of them. Combined with the use of left over food as the base of the soup, a really good dish can be made from very little, which is something indicative of the broader, resourceful nature of the Polish.

Salads range from leafy salads, to potato salads and mizeria, which is a cucumber and sour cream salad which goes well with everything. The food in Poland tends to be more season driven than most places in the UK, likely because there’s a good emphasis on home grown or Polish products. In the winter this means you see more potato salads and dishes (not strictly salads) based on cabbage, like bigos, which is a cabbage based stew (Polands national dish). This also makes easily preserved foods a staple in most meals, pickled vegetables, dried mushrooms etc can be found all year round. One of the best preserved food items is kompot, preserved fruit/juice that’s used as either a desert or drink with meals. When it comes to deserts, it’s impossible to avoid Polish cakes, there are so many cakes in various forms, from baked cheesecakes to jelly topped cakes. I’ve yet to have a bad cake in Poland, but I think my favourite has to be Karpatka, which is cream filled choux type pastry. I think I’ll make a separate post at a later date covering cakes/sweets, as it may take a while!

As mentioned in my previous post on weddings, there are many courses of food, and similarly other celebrations like, baptisms etc will have an abundance of food. Typically in a table buffet style, where there will be a range of different meats, salads, potatoes and dumplings. The meat dishes are often breaded cutlets, roulades, stuffed loin or similar, then to go with this a range of potato, dumpling or salad dishes. But it’s not only celebrations that have large spreads, the Polish hospitality is generous, and if you find yourself in someones house as a guest you can expect to be well fed. Even friends/family calling in can be assured a strong coffee and generous piece of cake.

So if you ever find yourself fortunate enough to travel to Poland hopefully this brief intro to the food helps, or outside of Poland you might find a Polish restaurant near you. Fortunately I have “Under the Eagle” near me in Newmarket UK to satisfy my Polish food cravings.